Adrian Reginald Butler has enjoyed close encounters with orangutans, hornbills and even pygmy elephants in his beloved Malaysia. The Briton who has now lived in Malaysia for over nine years says: “Malaysia is such a lovely place to retire to, especially the island of Langkawi where I now live.”

The 73-year-old was on the Silver Hair programme for two and a half years and was then switched to MM2H by the Immigration Department. “I came here in April 2000 and lived in Mersing, Johor, until June 2007. After that I moved to beautiful Langkawi and love it here.” 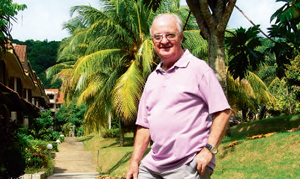 Reginald worked as a marine electronics engineer before retiring in 2000. Before that he worked in Singapore for eight years spending most of his holidays with his family over the causeway in Malaysia.

So what was it about the MM2H scheme that tempted him to join the programme? The climate, the people and the country itself as well as the low cost of living, he says. Reginald did consider other countries before finally deciding on Malaysia. “Thailand, for example, didn’t really appeal to me because I was put off by the limited period of the visa which is one year.

Australia also required a very high amount for the Fixed Deposit for their retirement programme and the living cost is quite high there. Malaysia, on the other hand, is a lovely country with nice people and good climate and it’s great value.”

His favourite holidays and experiences in Malaysia since joining MM2H have been touring the country by car. “So far, I have visited Kuantan, Terengganu, Kota Bahru, Penang, Cameron Highlands, Melaka and Johor Bahru as well as the lovely islands of Tioman, Rawa, Besar, Aur, Pemanggil, Perhentian and Kapas. My most enjoyable time was probably when I visited Sabah and Sarawak. While staying in Kota Kinabalu, I visited the Orang Utan Sanctuary at Sepilok and went jungle trekking in the Borneo Rainforest Retreat and the Kinabatangan Jungle Resort where I saw wild orangutans, hornbills and pigmy elephants. In Sarawak, I enjoyed seeing Kuching, Sibu and Miri and the Semenggoh Wildlife Rehabilitation Centre as well as several Bidayuh longhouses.”

Reginald has always felt welcome in Malaysia. “My friendly and helpful neighbours are Malay on one side and Chinese on the other. I have good friends in all three of the main ethnic groups. As far as living standards go, he says Malaysia is very favourable compared to other places. “Living in Langkawi my days are almost always occupied. I spend an hour or two per day on the Internet keeping in touch with friends and family. We have a very nice pool at the apartment complex and I like to swim.

There are lovely beaches here so I also go to the beach to swim and have barbecues. Living in such a nice place as Langkawi I often have friends from overseas visiting. Apart from travelling within Malaysia, I use the excellent flight connections from KL to spend time visiting my daughters in Cambodia and Ireland and friends in Australia, Vietnam, Laos and Indonesia.”

How was it applying for the MM2H programme? “It was easy and I always recommend the programme to people I meet. The pleasant people, the nice climate and low cost of living in Malaysia, plus the relative ease of getting the visa make Malaysia a great place to live, especially when you’re retired.”