Britons David and Pauline Edney regard living in Penang as “one long holiday”. The Birmingham couple have lived in Malaysia under Malaysia My Second Home for the past four years having found out about the programme through an article in a British newspaper. “The article featured a couple already living here under the original Silver Hair programme. From then on we went all out to find more information on relocating to Malaysia,” says David, 62. 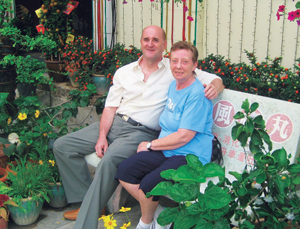 David, a retired insurance broker and Pauline, a retired care assistant for the disabled, had holidayed many times in Asia before they decided to move here. “We would always include at least a week in Malaysia, especially Penang, in our holiday schedule,” says David. On retiring in 2003, the Edneys stayed in Penang for three months to see if living there would be the same as holidaying there. They came to the decision that it most certainly was. They sold their house in the UK within three days (those were the days before the “credit crunch”) and within three weeks had returned to Penang to make it their home. “We have only returned to the UK for two weeks in the last five years and that was at the height of the British summer and it rained every single day!” recounts David.

So what was it about MM2H programme that appealed to them? One deciding factor was the visa which meant they could avoid having to leave the country every three months.

There was also the appeal of being able to holiday in Malaysia whenever they wanted. “We have taken short breaks around Malaysia in places such as Melaka, the Cameron Highlands, Kota Bharu and Kuala Lumpur.”

To them, the advantages of living in Malaysia all begin with the letter ‘C’ – climate, culture, cuisine and cost. The continual warmth and virtual 12 hours of daylight are a huge boon. “The cultural mix makes acceptance here easy. The cuisine is so varied and good quality and this makes entertaining and socialising simple and enjoyable. Lastly, the cost of living here is so much more acceptable when compared to the UK,” says David.

Do they miss anything about their home country? “Very little actually, we particularly don’t miss the weather given the recent severe winter conditions in the UK,” says Pauline, 65. “David does miss his ‘warm pint’, Melton Mowbray pork pies and Brains faggots!” she adds jokingly. Pauline does enjoy her socialising and shopping with new friends while David paints using water colours. “He attended a course for a year in the UK before retiring but has only painted two pictures since living here. I suspect the paints have now deteriorated beyond use,” she quips.

As for the MM2H programme, they have recommended the scheme to many others. “It was relatively easy to apply. We have just renewed our five-year visa to meet the RM10,000 income requirement. As David’s pension is a private company scheme and not a government pension it would have been necessary to open a Fixed Deposit of RM150,000 under the new rules. The authorities should realise that not all retirees from the UK are civil servants and it is impossible to earn a state pension of RM10,000 per month for non-civil servants,” explains Pauline.