Malaysia has a myriad of fascinating places to visit ranging from lush rainforests to picturesque white sandy beaches to vibrant cities. One of these is the bio-diversity rich and protected Krau Game Reserve in Pahang. The Reserve spreads over 53,000 hectares and within this vast reserve of pristine tropical rainforest, there is a bewildering variety of wildlife, including many endangered species.

Frank Lambert initially came to Malaysia to do his PhD in Ornithology and Conservation in the early 90s. Pursuing this Frank spent most of his time at the Krau reserve studying fruit-eating birds. 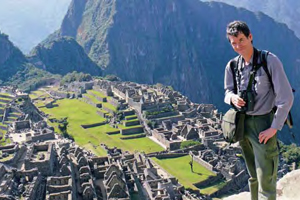 Frank completed his PhD here (University of Aberdeen, Scotland) in association with Universiti Malaya, and then pursued another post-doctorate at Danum Valley in Sabah. Frank has since decided to live in Malaysia permanently and he received his Malaysia My Second Home (MM2H) visa earlier this year. The 40-something from Brighton in the UK, worked in wildlife conservation, mostly around South East Asia, but then he moved to South America where to lead bird spotting tours. “I still work part-time leading tours outside of Malaysia. My next tours are in Papua New Guinea and Colombia.” Frank has spent time in many countries, from Afghanistan and Nepal to Sierra Leone, Sudan and even Cuba and the USA.

“Malaysia has a high ‘standard of living’ compared to many countries, at least in the capital, but you can’t simply judge a country purely based on standard of living. What is just as important is that Malaysia seems to be a stable country. Unfortunately, alas, Malaysia seems to have suffered a lot of environmental degradation in the pursuit of development. In the long-term this may have negative effects on the high standard of living that it presently enjoys,” he warns. He adds that other than a few small changes, Malaysia has retained much of its charm. “It seems hotter now I must say! Beer is outrageously expensive (the most expensive ‘pint’ anywhere in the world is to be found a few blocks from where I live) and public transport by bus is much worse than it was (in terms of frequency, not comfort). Otherwise, Malaysia has not changed that much in the 15 years or so since I last lived here. It is still a very pleasant place to be. Although I got my visa a few months back, I’ve only spent a few weeks here since I was on a month-long boat trip from New Zealand to Japan, then travelling in Taiwan.”

The thing that tempted Frank to join the MM2H scheme was how straightforward it was to get the visa combined with the fact that he’s lived here before and liked it. “Other countries I considered were Peru, where I was living before, Costa Rica and Panama. It was too complicated to get a visa that would allow me to spend as much time as I wanted in those countries and too expensive.

Other plus points for me are the 10-year hassle-free visa and the fact that Malaysia is very well positioned for travelling around this region. I’d certainly recommend it to others.”