As busy now as he was before he retired, Graham Bennett plays golf once a week, travels with his family once a month and the rest of his time he dedicates to giving something back to the country that has become his second home. “My dance card is full,” he says. 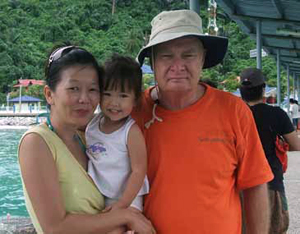 Graham worked in Malaysia before retiring here. Originally from Sydney, Graham had been working in Bangkok for several years when his office there closed down. It was up to him to decide where to open the next regional office. “I chose KL,” he says. “I liked the city, the sophistication and the variety. I liked the culture, the climate and the people.”

When he retired, staying on was an easy decision, made even easier by the Malaysia, My Second Home (MM2H) programme which allowed him to convert his work permit to the MM2H visa.

Being Social
“I have three hobbies; travel, golf and serving my community,” says Graham. Of the three, golf is the one he has taken up most recently. “I wanted exercise. I also wanted something social.”

There are countless golf courses around Malaysia and many of them have been the site of international golfing events, though Graham enjoys playing his weekly game on a quieter neighbourhood course. As for travel, “I love Malaysia’s central location,” he says. “It is one flight to Australia, one flight to Europe, one flight to almost anywhere.” In addition, air flights are cheaper from Malaysia than from many other countries. Graham goes back to Australia once or twice a year but he also takes monthly trips elsewhere with his wife and daughter.

Giving Back
When Graham lived in Australia he was active with Rotary, a worldwide organisation of more than one million volunteers. Rotary’s motto is “Service Above Self” and its volunteers work together to improve the conditions of others, both at local and global level.

When in Thailand he had to take a break from the organisation because, although there was as strong a presence there as anywhere else, there were no clubs that spoke English. Since English is widely used in Malaysia, this was not a problem once Graham moved here and to hear him tell it, it sounds like he had found and joined a club before he had even finished unpacking.

“The camaraderie was great,” says Graham, who credits Rotary Malaysia for having helped him make dozens of like-minded friends, nearly all locals, within a month of moving here. He has breakfast with his fellow Rotarians once a week and also plays golf with some of them. Graham loves the projects his club is involved with here. “Every year we take 10 volunteer doctors to very poor areas to give the people there a complete check up. 90% of the people are okay, but doctors always find some small things.”

Other things are not so small. “A lady came in with extraordinarily high blood pressure. She had never been to a doctor before.” The doctor gave her medication and also explained the seriousness of her situation. Through a Rotary education fund, they cover the education costs for 18 high-school-aged students, some of whom live in orphanages. Once a year they also take the teenagers to leadership camp. Graham participated in some of the camp’s activities. “I thought I was 25 again, but the next day my muscles told me that I wasn’t!”

“I get the greatest satisfaction from giving back to my community,” Graham says.

Advice to other MM2Hers
“The key to relocation,” says Graham, “Is that you must treat your new country as home. Unpack all your boxes, decorate your house, get involved with Rotary or a church or temple… You must call it home from the day you decide to move, it makes things much easier.”

He admits that relocation is not for everyone. “But if you want to relocate to a tropical country where the people are friendly and where it is easy to live, Malaysia should be high on the list.”