Take a walk down a busy street, or listened attentively to the people around you in restaurants and shopping malls. Chances are you might feel a little overwhelmed by the various different languages and dialects you hear in Malaysia.

Malaysian Malay People
The Malays are an ethnic group of Austronesian people who populate Peninsular Malaysia, parts of Thailand, Myanmar, Singapore, Indonesia, Brunei and the island of Borneo. The history of Malays can be traced as far back as 100AD. In short, the Malays consists of Austronesian-speaking people from mainland Asia, from the Kingdom of Champa (an ancient kingdom in Vietnam) and from Sumatera, who migrated to Malaysia between 2500 BC and 1500 BC. Presently, the Malays make up half the population in Malaysia.
(Austronesian – people from various places in Southeast Asia and Oceania)

The first historical record of Chinese immigrants was in the 15th century, when the Sultan of Malacca, Sultan Mansur Syah, married a Chinese princess. When the princess came over, she brought with her five hundred youths and maids of noble birth. The descendants of these people are called Baba and Nyonya. They are also known as Peranakan Chinese.

Later on, in the 19th century, more Chinese immigrated to Malaysia to work in rubber plantations and tin mines.

Malaysian Indian People
Malaysian Indians are descendants of those who migrated from India when the British were colonizing Malaysia, or as it was known back then, Malaya. The majority of these migrants are Tamils; followed by Punjabis, Gujaratis, Telugus, Sindhis, Ceylonese, Malayalees, and other smaller ethnic Indian groups.

The Indians first came to Malaysia for trading purposes in Malacca. Others were sent as labourers in coffee plantations, rubber and oil estates, when the British ruled India. The Indians are the third largest ethnic group in Malaysia.

The three main races in Malaysia each have their own unique language and dialects. The Malay language has ten dialects, the Chinese has seven and the Indians have six. 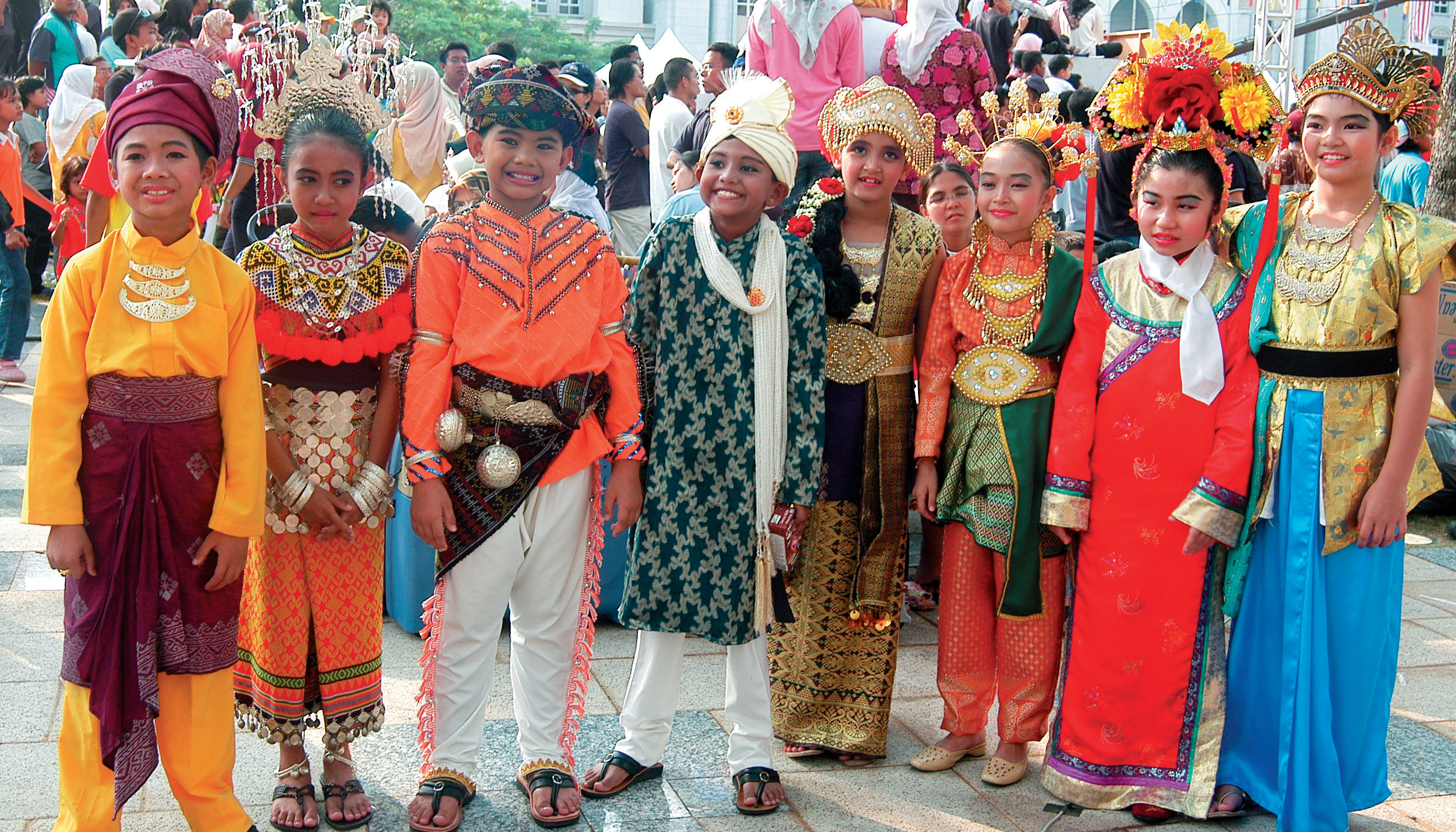 Malay Language
Originating in Sumatra, the Malay language, or Bahasa Melayu, is the national language of three countries; Malaysia, Indonesia and Brunei. In Malaysia, it is known as Bahasa Malaysia. This language is also spoken in Singapore and parts of Thailand. In Malaysia, all students at local schools are required to learn Malay.

Chinese Language
Mandarin is generally spoken by the Chinese in Malaysia, but Hokkien is the biggest Chinese dialect in the country, followed by Cantonese, Hakka, Teochew, Fuzhou, Hainanese and Foochow.

Hokkien is mostly spoken in Penang, north of Perak and Kedah. Cantonese is widely spoken in Ipoh (in Perak) and Kuala Lumpur. Mandarin is popular in Johor and Foochow and Hakka in Sarawak and Sabah. In Sabah, some of the Chinese in Sandakan can speak Cantonese. Many Chinese can speak more than one Chinese dialect.

Indian Language
The majority of Indians in Malaysia are Tamils, and they speak Tamil. Other Indian languages in Malaysia are Telugu, Malayalam, Hindi, Punjabi and Gujarati. The new generation of Indians have started mixing Malay and English words with their respective dialects.

Some Indians can also speak Mandarin to help them with businesses, and many are choosing to send their children to Chinese educated schools to help them learn an extra language.

English Language
Fortunately for expats, English is widely spoken in Malaysia and English is actively known as a second language. It is easy to live in urban areas of Malaysia by only speaking the English language. Business in Malaysia is conducted in English and examinations are based on British English. Spoken English in Malaysia is heavily influenced with American English because of television influence.

Manglish
Manglish is English with influences from the Malay, Chinese and Indian language. It is a unique dialect of English in Malaysia.

For example, the use of ‘lah’, ‘meh’ are commonly used filler words and exclamations such as ‘cabut’ (escape) and ‘fuyoh’ (exclamation of amazement) are considered Manglish. The Malaysian Government strongly disapproves of the use of Manglish.

Bahasa Rojak
Bahasa Rojak which translates into mixed ‘languages,’ refers to the Malaysian way of mixing languages when speaking. For instance, a person will start off speaking Bahasa Malaysia, and branch out into English, with some Chinese and Indian language, or Manglish words thrown in. Example, “You memang gilar betul lar” – “You are really mad”, is a mix of English, Malay and Manglish.

The origin of Bahasa Rojak can be traced back to early Malacca years (1402) when traders from all over the world would converge in Malacca (Malacca was an international port for trading during the 15th century) and converse by using a mixture of words from different languages to sell and buy goods.

Peranakan Language
The language spoken by the Peranakans, Baba Malay, is a mixture of Bahasa Malaysia and Hokkien. Unfortunately, not many speak this language anymore. The older generations still maintain the use of this language, but the younger generation has replaced Baba Malay with English.

East Malaysian Languages
In addition to the languages discussed above, some people in East Malaysia speak Jaku Iban (Iban), Coastal Kadazan (Kadazan), Bajaw, Kelabit, Bidayuh and Kayan. These languages are considered Austronesian languages. With so many different languages in Malaysia, things can get a little confusing. Fortunately, English is widely spoken in Malaysia, and it’s very easy to live in this country by solely speaking that language.

There are various dictionaries and handbooks that you can pick up to learn a few basic words from the many languages in Malaysia, or, you could visit here for a few helpful words and phrases in Bahasa Malaysia.