Dick Sluijmers and Ineke Hertogh live in Sabah but a quiet retirement is not on the cards for them, this Dutch couple’s membership of the local 4×4 club ensures that’s simply out of the question! 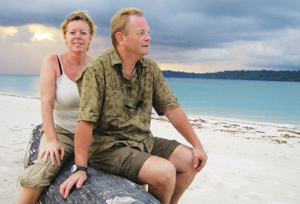 The Expat: How long have you lived in Malaysia under the Malaysia My Second Home programme?
Dick: We’ve been living here in Kota Kinabalu for 10 months

The Expat:Why did you choose this part of Malaysia?
Ineke: We travelled around the world looking for a place to settle down, after many years of hard work. We got close to going to the Caribbean and also Thailand. Eventually we decided that Sabah in Malaysian Borneo appealed the best to us! We first came here on a scuba diving holiday, then returned twice more. That clinched it for us.

The Expat: What was the main reason you decided to come and live here under the MM2H programme?
Dick: We joined MM2H, so we could stay as long we liked with the five-year visa [now it is a 10 year visa] the people in Sabah are so nice and friendly. They are helpful and tolerant, being multi-racial and mulit-religious, which certainly impresses us. Security is reasonably good, reasonable quality of healthcare and, of course, the relativity cheap quality of life, with many varieties of gorgeous food!

The Expat: What do you like most about living in Malaysia?
Dick: Apart from the friendly people, the warm tropical weather. Plus, here in KK we usually have cool breezes in the mornings and evenings. The great variety of food, in particular the Malaysian stalls and local coffee shops have so much choice for such low prices compared to back home. Ineke: The Sabah people are so genuinely friendly and there is a laid back atmosphere. English is widely spoken; there is always someone who is willing to assist by speaking reasonable English

The Expat: What do you like least about living in Malaysia?
Dick: Perhaps the traffic can be a problem at certain times. Some bad driving habits are also annoying. Perhaps Malaysians could also take more care of their beautiful environment.

The Expat: Did you take any trips within Malaysia in the last year?
Ineke: Yes, many! This is our major joy of exploring Sabah, especially by 4×4 cross-country. We joined the local 4×4 club and have had many great adventures, both on and off the road. We have been all round the state of Sabah and probably seen more of the countryside than many local people? Dick: We even went to Miri in Sarawak, through two parts of Brunei, which entailed getting 11 immigration stamps in the passport!

The Expat: Do you socialise mostly with foreigners, Malaysians or both?
Dick: Both, we have lots of local friends. We joined the Kimball Yacht Club, as well as the 4×4 club. We are members of nearby Kinabalu Yacht Club. Also the Sabah Society, mainly for their ecology, nature and historical talks.

The Expat: What do you miss most about your home country?
Ineke: In one simple English word, which you would expect from the Dutch, CHEESE! Especially our local speciality, a strong tasting cheese with a salty texture which has been ripened by Dutch farmers for at least 18 months! It’s much better than the easily available, inevitable Edam!

The Expat: How happy are you with the MM2H programme?
Dick: We’re happy that it is now a 10 year visa. We would definitely recommend the MM2H programme; it is well worth the effort to have such a good quality of life at our “young age!” As a matter of interest we are going to be “stars” on a Dutch TV progamme. Dutch TV TROS followed us packing up in Holland then coming here for a week. They then came back three months later. The programme is to be aired on 11 December in Holland; unfortunately it is in Dutch, so not very interesting to all the English speakers here, however we hope it will generate more visitors from Holland, Belgium and Germany!